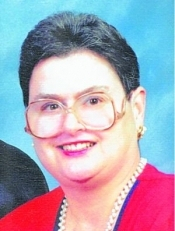 Vivian Kaney DeHart, 58, of Christiansburg, passed away Sunday, February 23, 2014, at the Lewis Gale Montgomery Hospital. She was preceded in death by her parents, James and Mildred Kaney. She is survived by her loving husband of 28 years, Charles DeHart; the honor of a son, David C. DeHart; and a daughter, Cathleen M. North; sister, Tina M. Melton and her husband, Matt; and their daughter, Olivia; brothers-in-law, Earl R. DeHart Jr. and Eric N. DeHart; sister-in-law, Kay E. Cash; stepmother, Essie Lee Kaney; grandchildren, Gabriel DeHart and Megan North; and a special word of thanks goes to her lifelong girlfriend since first grade, Kay C. Austell, of Kernersville, N.C. Viv belonged to the Navy ROTC at North Augusta, S.C., High School and was greatly honored to be the first female to be ranked; she earned the top rank of Lt. Commander. Her early passion was teaching, and she taught in North Augusta, S.C., and in Miami-Dade County in Florida. She served as a Pharmacist Tech for 10 years and a Patient Advocate in the E.R. for two years at DeKalb General Hospital, Decatur, Ga. And as a pastor’s wife, she excelled in fulfilling that role for the next 24 years and retired with Charles in Greeneville, Tenn., in 2009. Relocating to Christiansburg in June 2009, the DeHarts were proud to unite with St. Paul United Methodist Church. A memorial service will be conducted 7:30 p.m. Tuesday, March 4, 2014, in the St. Paul United Methodist Church Sanctuary to celebrate her life well lived. Officiating are the Rev. Michael J. Copeland and the Rev. Doug Kanney. Preceding the service from 6 to 7:30 p.m. will be the visitation in the Willing Workers Bible Class just inside the front doors of the church to the right. Flowers will be enjoyed and additionally, memorial donations may be made to the St. Paul United Methodist Church, Christian Education Fund, 220 West Main St., Christiansburg, VA 24073. Online condolences may be left by visiting www.hornefuneralservice.com.