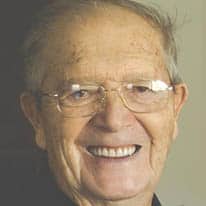 Richard “Dickie” Amos DeBusk, 92, of Ripplemead, VA went to be with the Lord on Saturday, December 25, 2021. Dickie was born on April 18, 1929, in Salem, VA, and was a son of the late Robert Franklin DeBusk and Emma Margaret Nutter DeBusk. Besides his parents, he was preceded in death by one son, Michael Jay DeBusk, one grandson, Michael Jason DeBusk and seven brothers and sisters.

Dickie was a graduate of the Pearisburg High School Red Devils. He was a U.S. Army Veteran serving at Fort Knox, Ky, reaching the rank of Corporal. After returning to Pearisburg, he and his father worked in the Giles County and surrounding areas in the construction business. In 1960, he began to work for Dobyns Construction in Dublin as a supervisor and then later became a part owner of the business, renaming it, DeBusk and Shelor General Contractors. He retired in 1994.

Dickie was a lifelong member of the Pearisburg Presbyterian Church serving as Deacon, Building Committee Chairman, Financial Steward and other various positions. One of Dickie’s longtime passions, was the Masonic lodge, serving as Worshipful Master for Giles Lodge #106, Grand High Priest of Giles Royal Arch Chapter, District Instructor of Work for the 41st Masonic District. He received the prestigious John Dove Award in 2019. Another passion of Dickie’s was fine wood working, spending many hours in his cabinet shop, creating furniture that he passed down to his children and grandchildren.

In lieu of flowers, donations may be made to the Pearisburg Presbyterian Church or the Shriner’s Children’s Hospital, Greenville, SC Unit. Online condolences can be sent to the family at givensfuneralhome.com