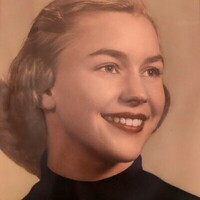 Bonnie Walker Dean, 82, of Radford, Va. passed away Wednesday, July 22, 2020. Born on September 22, 1937 to the late Ray and Pearlie Walker, Bonnie was raised on Walker Farm just outside of west Radford where she became a kind-hearted soul.

She was a dedicated student at Kuhn Barnett and Radford High School (’55), excelling in academics and cheerleading for the Bobcats. Bonnie was such an impressive student and citizen that she was selected to represent RHS at Girls’ State where she was elected by the statewide participants to be Governor of the Convention. Bonnie went on to attend Madison College (now JMU) where she studied to become a teacher. She completed her education degree in 3 years (’58) in order to graduate the same year as her high school sweetheart, Howard Yates Dean, who attended VMI.

The couple married and lived in Richmond where Bonnie taught elementary school while Howard attended medical school at MCV. After a brief move to Missouri, Bonnie and Howard returned to their hometown where Bonnie became immersed in raising her family while Howard grew his medical practice. Through the decades, Bonnie spent valuable time volunteering for the Radford Clothing Bank, Our Daily Bread, and the Radford Hospital Auxiliary; she was also active with her friends in her P.E.O. chapter and at Grace Episcopal Church.

Bonnie loved to cook and share recipes with her friends and developed a community newsletter called “The Cooking Hound” wherein many delicious recipes were shared for years amongst Radford citizens. Bonnie was a loyal supporter of Radford University and donated financial resources and Walker Farm family artifacts for the inception of the RU Selu Conservancy on the Little River near the family farm. Bonnie was a loving mother to her children and treated their friends like her own, never without a smile and kind words of encouragement to all.

The family wishes to especially thank Bonnie’s sister, Joan, and Commonwealth Senior Living for their care during Bonnie’s last years.

In lieu of flowers, Bonnie’s family requests donations be made to the Central and Western VA Chapter of the Alzheimer’s Association at 355 Rio Road West, Suite 102, Charlottesville, VA 22901; or to the RU Selu Conservancy at P.O. Box 6911, Radford, VA, 24142.

A private service for Bonnie will be held in the future where her ashes will be spread over her husband’s grave and laid to rest beside him in the Dean Family Cemetery at Claytor Lake.

The Dean Family is in the care of Mullins Funeral Home & Crematory in Radford, Virginia. www.mullinsfuneralhome.com