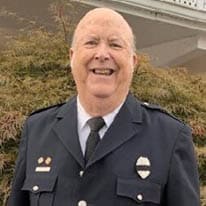 Larry Benton Day, Sr. of Narrows, Virginia went home to be with his Lord on Thursday, February 10, 2022, at his home. A lifelong resident of Narrows, Larry was born on April 18, 1947, to the late Perry Allen Day, Sr and Pauline Robertson Day.

Larry was a 1965 graduate of Narrows High School and was a volunteer fireman with the Narrows Fire Department for 54 years. Larry’s view of the Fire Department was simple – – you treat the Department as you would your own Mother. You do what it takes to take care of it and serve. Larry is a retired member of VDOT with 38 years of service. He started in 1967 as a Draftsman and worked his way up to Contract Administrator. A lot of secondaries in Giles, Pulaski and Montgomery Counties he worked to improve and widen throughout the last 20 years of his employment there. He had also served on the Board of Directors for the Giles County Industrial Development Authority.

He played piano for the Rich Creek & Narrows First Baptist Church throughout the years. Larry has played the piano since he was a young boy. His Grandmother, Mary, gave him his first lessons and he took off from there. Larry strongly felt that his talent was strictly from God. When he sits down at a church service or anywhere for that matter, and starts to play he really felt that what came out of his hands and into his music is from our Lord, God. He always says that his talent it not as good as it sounds – God makes it sound good. Of course, his family is very prejudiced and feel that he doesn’t give himself enough credit, but that’s just the way he was.

The family will receive friends at the chapel at Givens – Riffe Funeral Home on Sunday from 12:30 to 3 pm with the service to follow at 3pm.

The family is being served by Givens-Riffe Funeral Service in Narrows, VA, (540)726-2442, and online at riffefuneralservice.com.