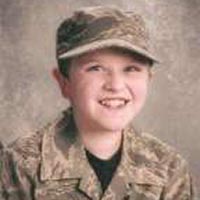 Travis Scott “TJ” Anderson Davis, 19 of Edmond, Oklahoma departed this life to be with his Lord June 15, 2018 while surrounded by the love and blessings of his adopted family after a lifelong battle with Duchenne’s Muscular Dystrophy.

Born on July 1, 1998 in Radford, Virginia, TJ was the son of Angie Combs and Travis Anderson. TJ was so special that he would later be adopted/chosen by Jane and Charles Davis of Edmond whom he loved dearly. TJ always enjoyed sharing a smile through the pain that inspired others to keep on their journey and share their love and joys. In addition, he enjoyed the sights and sounds of Scooby Doo, Reba, and Mustangs. TJ was adored by his special cousin Leslie Ruetz who affectionately called him “Rooster”.

TJ was preceded in death by his maternal step grandfather “Pops” Jerry Neice Sr, paternal grandparents: Glaydas and Jimmy Anderson, an Uncle Darin Neice and an Aunt Martha Anderson. Left to cherish his memory and smile are his mother, Angie (Tommy) Combs, his father Travis (Kathy)Anderson Sr, his adopted parents Charlie and Jane Davis, grandmother Anna Faye Dowdy of Pearisburg, grandmother Rosa Vaught of Pearisburg, and grandparents David (Tina) Neice of Princeton, WV, two brothers of the home Jamie Davis and Paul Davis, other siblings are Amber, Jennifer, Austin, Becky, Jacob, and Will, and many special aunts, uncles and relatives all of whom held a special place in their hearts for TJ.

The Memorial Service with Balloon Release for TJ will be held Saturday, July 7, 2018 at 10 AM at the Pearisburg Community Center Shelter with Pastor Eddie Kendall officiating. At the family request, in lieu of flowers please make all monetary donations to Eddie Kendall for a memorial bench provided for by his adopted family. The Kendall Funeral Home in Pembroke is in charge of the arrangements. Online condolences may be sent by visiting kendallfuneralhome.com.