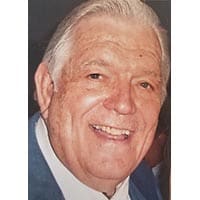 Richard Waters “Dick” Davis, passed away peacefully in his sleep in Radford, Virginia, on June 2, 2019 at the age of 87. Dick said every morning while reading the paper, “Hell must be a lonely place because everyone in the obits only goes to heaven,” so he was no doubt met at the pearly gates by a crowd of family, friends and a host of pets as he was a most loving, kind, and gracious gentleman, and the best dad and granddad ever.

Dick was a true Renaissance Man. He was born in 1931 and raised in Rocky Mount, Virginia, where he was a star basketball player at Rocky Mount High School, graduating in 1948. He attended Hampden-Sydney College and graduated from Centre College in 1952. Dick enlisted in the U.S. Air Force and flew B-57 jet bombers as a navigator stationed in Japan and Germany.

In keeping with the Davis family tradition, he attended law school, graduating from T.C. Williams School of Law at the University of Richmond in 1959, after only two years of study, and passing the Bar that same year. Dick met and married Mary Alice Woods from Salem, Virginia, while attending law school, and moved to Radford in the summer of 1959 where he began his law career with the well-established law firm of Dalton, Poff & Turk. Dick became a revered trial lawyer, legal scholar, professor and Judge.

He loved Radford and was very involved in the community. He was President of the Radford Jaycees in 1962 and Vice President of Virginia Jaycees in 1963. Dick was awarded Radford Chamber of Commerce’s Distinguished Service Award in 1966. He served as Radford’s President of Kiwanis International in 1966, and as the Commonwealth’s Lt. Governor of Kiwanis International in 1969. Dick was on the Board of Directors and a member of the Executive Committee of First Virginia Bank and BB&T Bank from 1969-2004; served on the Board of Directors for Saint Albans Hospital from 1973-2004; and was on the Board of Directors of Carilion Clinic from 1989-2004. Dick was a Youth and Rec League basketball and baseball coach, where his love for the Radford Bobcats grew each season.

After an unsuccessful run for Commonwealth’s Attorney, Dick was appointed Radford’s Municipal Judge, sitting on the Bench in General District and Juvenile Courts from 1962-1980, while also maintaining his private law practice. Dick shared his vast knowledge of the law by lecturing throughout the Commonwealth and was an Associate Professor of Business Law at Radford University from 1982-1988. He served as President of the Radford-Montgomery Bar in 1974; served the Virginia Bar Association Disciplinary Committee from 1986-1989; was on the Virginia State Bar Council from 1989-1995; served the Virginia Law Foundation as a Fellow on its Council from 1989-1995; and served the Virginia Public Defenders Commission as Vice Chairman from 1999-2002 and Chairman from 2002-2004. Dick was named a Fellow of the Virginia and the American College of Trial Lawyers, elite organizations whose members comprise the top 1% of trial lawyers in America.

Although Dick’s presence in the courtroom was intimidating, he was a compassionate lawyer and Judge, who always strove to protect the rights of the working class and underprivileged. As the founding partner of Davis, Davis & Davis Attorneys in Radford, Dick was a proud mentor to the next two generations of family attorneys; two of his sons and a granddaughter practiced law with him until the day of his death. Dick’s passion for the law spanned 60 years as he continued to study and prepare for depositions, hearings and trials.

Poker was another of Dick’s passions. He studied cards, as he did law; his favorite pastime was being seated at a poker table. In 1984, Dick authored and published “Hold’Em Poker Bible”, a poker classic, which graced the palms of renowned players such as Steve Wynn, Bill Boyd and Bobby Baldwin; his book still sells today. In 2010, Dick earned entry and performed well in the World Series of Poker in Las Vegas, where he celebrated his 79th birthday being cheered by his entire family under the moniker “The Dragonfly Guy.” When not practicing law or playing cards, Dick relished time with his family and friends – telling tales of the good ol’ days, singing, watching sporting events, Jeopardy, and was in awe of wildlife and nature shows. Dick ruled the world “My Way” with a few regrets, but too few to mention.

The family will receive friends from 5 to 8 PM on Wednesday, June 5, 2019 at Mullins Funeral Home in Radford. Funeral services will be conducted on Thursday, June 6, 2019 at 2 PM in the Radford High School Auditorium. Graveside service will follow at West View Cemetery. In lieu of flowers, the family is requesting donations be made to American Legion Post 30 Radford, VA; Carilion Clinic Foundation; the Radford High School Athletic Boosters Club; or ante up at your next poker game in his honor.

The Davis family is in the care of Mullins Funeral Home & Crematory in Radford. www.mullinsfuneralhome.com