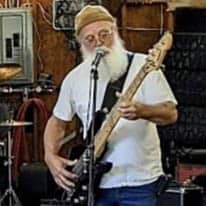 With heavy heart, we announce that Michael Pierce Davis, age 69, died suddenly on December 20. We are heartbroken at the unexpected and tragic loss of our father, grandfather and brother.

Mike proudly served in the United States Army, stationed in Fort Hood, TX. Mike was a true American blue collar worker, a tradesman who worked with his hands, doing whatever it took, to ensure his family had food, shelter and clothing. Normally a quiet man, he truly loved the chaos a house full of girls brought.

Aside from his children, Mike had several passions in his lifetime including spelunking and music. In his younger years, Mike was part of a local group of hobbyist spelunkers who explored and charted many local southwest Virginia caves. Mike loved including his friends, but more importantly, his children in his underground adventures.

Truth be told, Mike was best known as the Bass Man of Pulaski. His musical career began in a band called Sagebrush. Mike kept rhythm for many local bands, but the pinnacle of his music career happened on November 12, 2022, when he reunited with the Crashlanders and played their final gig at Thornspring Golf Course. The joy of performing again with his mates Chuck King, Mike Hall, and his brother, Clay Davis, to local fans that spanned 50 years, was an epic ending to a well lived life.

In lieu of flowers, the family asks that you reach out to family and friends and let them know they are loved.

A memorial service will be planned for a later date at Thornspring Golf Course.