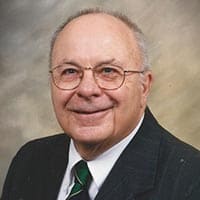 Lynn Arthur Davis passed away peacefully on September 28, 2018 at The Villages Hospice Center in the loving care of his daughter. He was 87 years old. Lynn was born on August 9, 1931 in the small farming town of Franklyn, Iowa.

Lynn was the son of Lynn A. and Minna Sophia Burghoffer Davis. Lynn attended Akron High School and graduated as salutatorian of his class. He was a member of many social clubs, played drums and sports. Upon graduation, Lynn attended the University of Vermont. He was member of the Sigma Nu Fraternity and played in the university marching band and the concert band. He graduated in 1953 with a B.S. in Finance and Economics. After graduation, Lynn spent two years in the Army. He served as 1st Lieutenant in the 1st Infantry Division 18th Infantry in Germany. Upon returning to the states, Lynn earned an MBA at Western New England University ’59. Lynn was employed by Kollmorgen Corporation, Inland Motor Co of Radford, Va., and Volvo Heavy Duty Truck Corporation where he remained until he retired in 1988. Lynn relocated to the Villages Florida in 2014.

Lynn is preceded in death by both parents and his wife, June Robert Davis. He is survived by his daughter, Heather Davis Coiro; son-in-law, John Coiro; grandson, Michael Davis Coiro; twin granddaughters, Sarah Elizabeth Coiro and Sophia Antoinette Coiro, all of Princeton, N.J. He also is survived by his stepdaughter, Brenda Roberts Jordan and her husband, William Jordan of Amelia Island Florida; and a stepson, Ronald D. Roberts and wife, Joan Roberts of Seattle, Wash.

The Davis Family is in the care of Mullins Funeral Home & Crematory in Radford, Va. www.mullinsfuneralhome.com