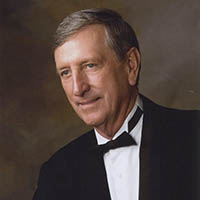 Larry Clinton Davis, 80, of Charlottesville, and Hiawassee, Virginia departed this life on Sunday October 20, 2019 surrounded by his family and loved ones after a lengthy and courageous battle with cancer.

He was lovingly known as Dad, Grandfather, and G-Pop by his family, but was also Uncle Larry many times over to a large number of nieces and nephews and friends everywhere. He let everyone call him “Grandfather” and took great pride in being a mentor and a role model for younger generations.

He was born in Bluefield, West Virginia on March 14, 1939 to the late Glen Davis and the late Eva Hale Davis. Larry was the youngest of seven brothers, Arthur, Curtis, Earl (Bucky), Emory, Ralph, and Howard, all whom preceded him in death. Larry was a member of the 1957 graduating class of Bluefield High School and delighted in hosting numerous class reunion picnics at his lake house on the shores of his beloved Claytor Lake. Most recently, he hosted the 60th class reunion there in August 2017. He had an amazing memory for names and faces and never met a stranger he couldn’t talk to and find common interests. Larry enjoyed people and was everyone’s friend. He will also be remembered as a good neighbor, generous to those in need. No one was surprised to find he had already cleared their driveway after a snowfall.

Larry was an accomplished exhibitor of Tennessee Walking Horses, bringing home numerous trophies and ribbons over the years. Among them the title of Amateur World Champion while riding his horse, Pushover’s Cashflow. He loved to show at The National Celebration in Shelbyville, Tennessee. He served as the President of the Tazwell Horse Show Association for many decades leading it to become one of the industries foremost shows. The show raised large sums of money for the Shriner’s Children’s Hospital. In 2013, Larry retired from showing and began spending much of his time on Claytor Lake.

He enjoyed the peacefulness, tranquility and beauty of the lake and stayed there often. He had a lifelong passion for the outdoors, escaping to the woods often to hunt or even just to observe the wildlife. His friends would agree that when calling him on his cell phone he often answered with a whisper only to explain that he was up in a tree stand or out in a blind!

Larry loved hunting and fishing adventures with family and friends. He took joy in sharing his expertise and knowledge with others. When you didn’t hear from him you could be sure he was probably tracking in the nearest wooded area. One of his favorite hunting traditions was going to New Mexico in autumn with his son, grandson and friends who joined him. He loved taking in the spectacular scenery and wildlife or packing on horseback into the Flat Top mountains of Colorado. His travel adventures took him to many places around the world, from the Salmon waters of Canada and Alaska, to scuba diving in the Caribbean and the South Pacific, and to Africa on Safari. He could be seen riding a camel on the beaches of Lamu, Kenya feeding giraffes from the window of the dining room at Giraffe Manor in Nairobi and hopping out of the rover in spite of the lions. He took every opportunity he had to travel and experience the world to meet people from all walks of life and cultures.

Larry was a devoted fan of UVA’s Cavalier sports, but in particular of the Men’s Cavalier Basketball team. Over the years he attended as many home or away games as he could. He devotedly followed the team to tournaments all over the country. In 2019, despite struggling with his health, he made the trek to Minneapolis to cheer the team all the way to NCAA Championship. Tears of joy ran down his cheeks that night as he watched the team win the much-coveted title, and his friend Coach Bennett climb the ladder to cut the net.

Larry had a keen interest in everything related to cars. He enjoyed drag racing with his son, and more recently watching NASCAR races on the weekends. In the last few years he had lovingly restored a 1969 Corvette, candy apple red of course, to enjoy the sunny days out on the open road.

Larry often expressed how blessed he was with his family. He welcomed visits and phone calls from family members, and in 2013 organized a large family reunion to honor his parents and his descendants.

Larry was legendary for this limitless work ethic regardless of the environment. You could find him on a farm milking cows, raising horses and ponies, on a tractor cutting hay, tending bees, harvesting corn, and pruning the orchard.

Larry was charismatic, selfless and a pure ray of sunshine. He will be greatly missed. He is survived by his former spouse and life-long friend Glenna Turner Davis; his daughter, Shelia Davis and her husband, Dr. Irv Kron, of Charlottesville, Virginia and Tucson, Arizona; his son Steve Davis of Coronado, California; three grandchildren, Hayden, Brianna and Steven Michael; and his beloved German Short-Haired Pointer, Lulu Davis.

The family would like to express their gratitude to the doctors, nurses, and medical personnel at the University of Virginia Medical Center, especially to Dr. Mike Williams, Kim Leake and Dr. Brian Behm. They demonstrated so much compassion, kindness, and dedication while caring for him during his illness.

A celebration of Larry’s extraordinary life will be held at 3 p.m. on Sunday, November 10, 2019 at the Lodge at Mount Ida Farm and Vineyard, to allow family, friends and the many people whose lives he touched to gather and honor him. Break out your favorite jeans, boots and hats and join the family for a Classic Country Celebration!

Online messages and condolences may be sent to the family by visiting: https://www.hillandwood.com/obituary/larry-davis

In lieu of flowers, please consider making a donation to the University of Virginia Cancer Center in Larry’s name at http://get-involved.uvahealth.com/goto/LarryDavis