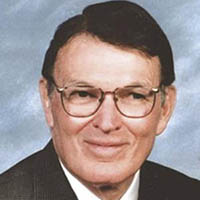 Dr. Russell Lewis Davis Jr., 84, formerly of Radford, Va., died on Friday, February 7, 2020, in Henrico, Virginia, at Spring Arbor Assisted Living. He was born in Rocky Mount, Virginia, on March 14, 1935, the son of the late Russell Lewis Davis Sr. and Winefred Skinnell Davis. He was preceded in death by an infant daughter, Beverly Ann Davis; his only brother, Bill Davis; and sister, Emily Londos.

Russ graduated from Franklin County High School in 1953, where he served as Student Body President; VMI class of 1957 where he served as class president; and the Medical College of VA in 1961. He was a family physician who practiced in Boones Mill, Virginia for two years and then in Radford, Virginia from 1964 to 2010. He was a long time member of Grace Episcopal Church, and served on the Radford University Board of Visitors from 1977-1985.

Russ enjoyed his practice of medicine and cherished the time spent with family, especially his grandchildren during his latter years. He also loved being with friends and enjoyed travel, photography, tennis, biking, reading, watching nature and wildlife programs and clearing farmland. The Little River was special to him and he spent much time enjoying its beauty.

The family is most appreciative of the good care and support of the staff and residents of Spring Arbor. A special thanks to his long time private caregiver, LaFonda Davis. Thanks also to Florence Eseh and the At Home Care & Hospice.

A memorial service will be held at Spring Arbor in Henrico with the Reverend Charlotte Evans officiating followed by a lunch to honor all who have helped the family during Dr. Davis’ long dementia illness. An interment of ashes will be held at Grace Episcopal Church in Radford on a later date.