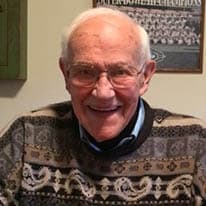 Hubert Clayton Davis, affectionately called The Mayor by many friends and family members, took his last breath on this earth in the early morn of his favorite day of the week, Sunday, this one just three weeks shy of his 92nd birthday.

He was a man of God, a devout Baptist, and a huge fan of family. His very large family. He was a lover of people in general, and it was that great love of people that served him well in the many stages of his life and career. Clayton lived all his life in Virginia, first in Dickenson County (the town of Haysi) and then in Giles County (towns of Pearisburg and Narrows). He was born the second of what would be three sons for Tiny and Toy Davis. Yes, that was their names!

In his youth he enjoyed driving fast on those curvy, country roads, riding motorcycles (broke his leg when one fell over on him while standing still), and playing cards with friends and family. From Rook to Pinochle to Spades to Bridge, card-playing became a passion that stuck with him throughout life. After high school he attended Emory and Henry College, and went on to graduate from National Business College in Roanoke.

He returned to Haysi to capture the heart and hand of his high school sweetheart, Patsy Sue Sutherland; they wasted no time starting a family of their own, first with three stair-step children. In 1954, Clayton and Pat, little more than kids themselves, packed up their own kids aged 2, 3, and 4 and moved to Pearisburg, Va., where they had no extended family, and very little money, but a big dream to start a business of their own. That business was a ladies’ and children’s clothing store called The Fashion Shop. It was successful, enough so that Clayton was able to let Pat run the store so he could accept the position of Postmaster of the little town.

Through the next decade, the family became ingrained in this town they had come to call home. They became devoted members of the First Baptist Church, Clayton becoming a deacon. He also was a loyal fireman, and a member of various civic organizations. The couple also bore two more children, for a total of five over the span of 17 years.

Family was at the heart of Clayton’s life – his immediate family, his extended family, and his Church family. And he was loved by all – family, friends, strangers he would chance to meet. His heart was big and full. Clayton had several careers throughout his life. After leaving the Pearisburg Postmaster’s position, he joined the New York Life Insurance Co.; he eventually owned and operated several gas stations from one end of Giles County (Pembroke) to the other (Narrows). It was the station in Narrows that they kept as their last, as the family had by then moved only two blocks up the street to Memorial Blvd., Clayton’s final address.

Perhaps a favorite of all his positions was Mayor of Narrows, a post to which he was elected for seven terms, or 14 years. His greatest accomplishment during his Mayorship was to secure Stimulus money during the Obama Administration to build a new bridge across the New River to unite, literally and figuratively, the two sides of town and its townspeople. The Randall W. Fletcher Memorial Bridge over The New River was no small feat, but the town had no small-minded mayor! Clayton’s love of people started with his family, and it has always been a big one. As his own father was fond of saying, “And not an ugly one in the bunch!” Clayton was predeceased by parents William Toy and Tiny Carlotta Davis; his forever-loved wife Patsy Sutherland Davis; his first-born son Roger Clayton Davis; two wonderful grandsons (Jeremy Barna and Travis Davis); and two beloved brothers (William Toy Davis, Jr. and Stacy Edgar Davis).

Services will be held at the First Baptist Church of Narrows, with the Revs. Jerry Sawyer and Roger Roller officiating. A viewing will be held from 6-8p.m. on Tuesday, Jan. 4, 2022, and the funeral at 11a.m. on Wednesday, Jan. 5, 2022, both at the Baptist Church. Burial will follow at Fairview Cemetery in Narrows.

In lieu of flowers, the family suggests donations to St. Jude Children’s Research Hospital, or the First Baptist Church of Narrows, or Medi Home Health and Hospice of Pulaski.