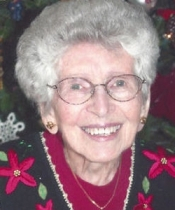 Elva Willis Davis, 97, of Narrows, went to be with her Lord Jesus Christ and her late husband, Stewart Davis on Saturday, March 8, 2014. She was born in Dickenson County, Va. on September 6, 1916, to the late Grover Cleveland Willis and Rosa Rakes Willis. In addition to her mother, father and husband, she was preceded in death by a brother, Clyde Willis; and a sister, Elsie Riddle. Elva and Stewart were married 74 years. Stewart’s testimony on their anniversary, a few days before he died at age 98, was, “If I had married a hundred times, I would have married Elva every time.” Elva was a local Giles County artist who began her art career at age 60. She was an original member of the Giles County Art Guild, an active member of the Home Demonstration Club, and a founding member of the Rose Garden Club. Together, she and Stewart ran a country general store at Tarpon, Va., a coal mine, where Elva served as the bookkeeper, as well as a restaurant, and raised two happy and thankful children. Elva was also an exemplary elementary school teacher in Dickenson County. She did commission work for Virginia Tech’s dairy science department, sold 1,000 prints of Burruss Hall, and many of her versions of the Virginia Tech Duck Pond. Her artwork was awarded to many Virginia Tech donors. Left to cherish her memory are her two children, Jerry Davis and wife, Sue, of Mechanicsville, and Sharon Turner and husband, Bob, of Christiansburg; six grandchildren, Sherri Balderson and husband, David, Karen Hardy and husband Randy, all of Mechanicsville, Kyla Erickson and husband, Paul, of Shorewood, Wis., Robbie Turner and wife, Susan, of Salem, Joseph Stuart Turner, of Pembroke, and Amy Fisher and husband, Daniel, of Christiansburg; 14 great-grandchildren, Andrea, Shannon, and Rachel Hardy, Andrew, Amy, Heidi, Emily, Betsy, and Madeline Erickson, Jacob, Caleb and Noah Turner, Chase and Bryson Fisher, and Katie Schoonover. Funeral services will be held Tuesday, March 11, 2014, at 1 p.m. in the Chapel of Riffe’s Funeral Service in Narrows. Entombment will follow in Birchlawn Abbey in Pearisburg. The family will receive friends at Riffe’s Funeral Chapel Tuesday from 11:30 a.m. until just prior to the service. The family requests that those sending memorial contributions, please consider the Huntington’s Disease Society of America; 505 Eighth Avenue, Suite 902; New York, NY 10018. The family is being served by Riffe’s Funeral Service in Narrows, 540-726-2442 and online at riffefuneralservice.com.