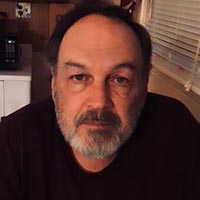 Barry Wayne Davis, 64 of Kellysville, WV, passed away on Thursday, October 9, 2020 at Lewis-Gale Hospital in Salem, VA. Barry was born on July 6, 1956 in Providence, RI and was a son of Franceina Louise Suttle Turner of Narrows and the late Melburn Kyle Davis.

Barry worked many years as a welder for the Norris Screen Company. Barry was a very humble man who loved everyone he met, and he never met a stranger. He loved Nascar Racing, Politics, and spending time with his family.

In addition to his father, he was proceeded in death by a granddaughter, Savannah Davis and two brothers, Todd and Timmy Davis. In addition to his mother, survivors include his loving wife Tammy Davis (Baby) of Kellysville, WV, three sons, Kevin Davis (Deni) of Oakvale, WV, Matt Davis (Carrie) of Narrows, Brian and Gennifer of Princeton, WV. A step-daughter Ashley Lucas of Pearisburg and step-son Josh Lucas of the home that he treated as his own. Grandchildren, Sara, Summer, Ariana, Arabella, AJ, Jacob, Lil Brian, Eddie, Alexya, Landin and Elizabeth. Great Grandchildren, Addi, Davis, Skyla and Raylan. Two brothers, Billy Davis (Pam) of Cashmere, WV and Scottie Davis (Sandy) of NC.

Barry will be missed by all who were somehow a part of his life. Heaven gained the most precious Angel of all.

A celebration of life will be held Sunday, October 11, 2020 at 2pm at the Givens – Riffe Funeral Chapel in Narrows with Pastor Jim Hagy officiating with burial following in the Fairview Cemetery in Narrows. The family will receive friends at the funeral home Sunday one hour before the service from 1 – 2 pm. We will be observing COVID-19 precautions, please wear a mask.

The family is being served by Givens – Riffe Funeral Ser­vice in Narrows, VA.