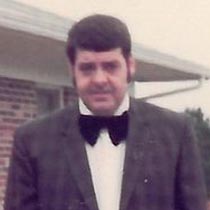 Bill retired from R.A.A.P. in 1992 after 32 years of service. He was a member of Centennial Christian Church (Disciples of Christ), McCoy, VA.

He was preceded in death by his parents, Roger and Dorothy Davies, a brother, John Davies and sisters, Marion Brady, Barbara Pescheck, and Margaret Blackman.

The family would like to thank Highland Ridge Rehab for the care they gave Bill, especially Patricia and Donna. As well as a special thank you to Sidney and Lisa Smith, Gail Williams, Cinda McCoy for their help during Bill’s illness, Longshop/McCoy First Aid and Dr. Lucian Robinson and nurse, Sharon Cox for their care through the years.

In lieu of flowers memorial contributions may be made to Centennial Christian Church (Disciples of Christ), P.O. Box 427, McCoy, Va 24111 or to the Longshop/McCoy First Aid, P.O. Box 389, McCoy, VA 24111. The family will receive friends from 5 to 7 p.m. Saturday evening at McCoy Funeral Home, Blacksburg.