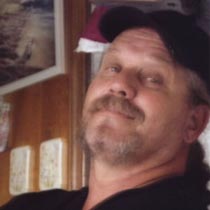 Growing up in poverty, he struggled with education. Out on his own, becoming an adult with his mother’s loving support, he chose a change. He found employment with W.E. “Curly” Donald and George Coleman who taught him to be a respectable, excellent painter that later grew him into his own business, and with the help of Ray Craighead and Jeannine Hanson, it flourished.

Eddie was a quiet, strong, hardworking, honest, likeable, creative, good humored man living the American Dream. Next to his family, his favorite enjoyment was riding his custom Harley Deuce “Jeannine.”

Eddie made a good life for his family, always supporting them. Being with his wife 33 years and would say “She is a good woman, that’s why I married her.” He was a good husband, perfect example of a father and loved his children dearly. He gave everything of himself to them and continuing with raising the eldest grandson, Desimus. He loved and enjoyed all his grandchildren, and will be missed dearly.

Praising the support of Bonnie and Michael for being there almost daily through all his hardship, and special thanks to Betty Corvin, his mother-in-law, for caring for him day and night when needed.

A memorial get together will be announced at a later date.