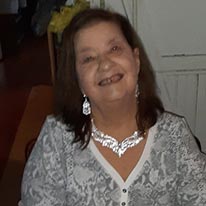 Judy Ann Dalton, 66 of Pulaski died at home on Monday, March 14, 2022. Judy was a devout Christian who served her Lord and loved her family with all her heart.

Judy was the daughter of George Carr Burton and Christine Elizabeth Meredith who will be meeting her at Heavens gate along with her departed husband, Lenford Dalton.

Visitation will begin at 11:00 on Friday Morning, March 18, 2022 in the chapel of Norris Stevens Funeral Home followed by a funeral service beginning at 12:00 with Dennis Hutchison officiating. Interment will take place at Highland Memory Gardens in Dublin. online condolences can be sent by visiting www.stevensfuneralhomepulaski.com or you may call the funeral home at 540-980-2600.

The Dalton family is in the care of Norris Stevens Funeral Home located at 815 Randolph Avenue in Pulaski. stevensfuneralhome@comcast.net