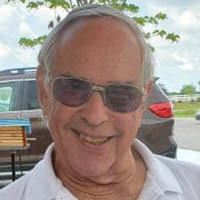 In 1945, Mark and family moved to Lomira, Wisconsin and attended Lomira community schools. He graduated in 1959. He married Carol Ehrhardt in 1960 and graduated from University of Wisconsin-Madison (1964) in Zoology.

Mark and Carol had three children: Karen (1961), Kris (1964), and Kurt (1968). Mark and family moved to Columbia, MO where Mark graduated from University of Missouri earning his Masters’ degree in 1967 and DVM in 1970. He practiced Veterinary Medicine in Joliet, Illinois for five years, then returned to University of Missouri to receive his PhD in Veterinary Medicine and surgery residency in 1981. Mark was staff surgeon at Virginia Tech from 1983-1990. He then opened North Main Small Animal Clinic and practiced there from 1990-2012.

Mark and Carol were actively involved with the United Methodist Church in Columbia, MO, Joliet, IL, and Blacksburg, VA. They were also active participants in the church choirs and community choral groups, including Blacksburg Master Chorale and Roanoke Opera. Dr. Mark Dallman was a member of several professional organizations including American Veterinary Members Association (AVMA), Virginia Veterinary Medical Association (VVMA), American and World Association of Veterinary Anatomy, Ruritan National and Mark was involved in scouting throughout his lifetime from Cub Scouts to Scout Leader.

In lieu of flowers, memorial contributions may be made to the American Heart Association, Blacksburg United Methodist Church in Blacksburg, VA or American Veterinary Medicine Association.