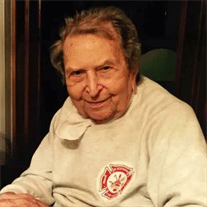 He is survived by his wife of 70 years, Frances Linkous Cupp; his children, Reggie and Norma Jean Landis Cupp, Pat Northrop, Aida and Denny Fisher, and Kim and Keith Rowland. He is also survived by his grandchildren, Todd Cupp, Rebecca and Tom Powers, Caitlin and Brandon Harris, Danielle Rowland and Chase Clendenon, and Tony and Ashley Rowland; as well as great-grandchildren, Robbie Cupp, Jack Cupp, Colton Harris, and Alexis Rowland.

The family wishes to thank the staff at Commonwealth Senior Living and the staff at Medi Home Health and Hospice for all of the love and support they have given the entire family. The first night that he spent at Commonwealth, he said that it was the nicest place he had ever lived. He truly considered it home and made friendships that will never be forgotten. He considered some to be an extension of his family and for this we are forever grateful.

Family will receive friends from 4-6 p.m. on Monday, December 26, 2016, at Commonwealth Senior Living, 201 Wheatland Court, Christiansburg. A Celebration of Life ceremony will follow beginning at 6 p.m. Graveside services will be private.