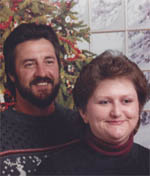 Kenneth McCoy (Kenny) Cumbee, 61, of Newport, died Thursday, October 3, 2013, at his home. He was born in Giles County on December 6, 1951, to the late Floyd Chapman and Lottie Lowe Dowdy Cumbee. Kenny was the President of the Industrial Cleaning Services, Inc. He is survived by his wife, Mitzi Raines Cumbee, of Newport; son, Mike Cumbee, of Pearisburg; sister, Phyllis Hutchison, of Blacksburg; father-in-law and mother-in-law, Joe and Judy Raines, of Newport; brother-in-law and sister-in-law, Mike and Michelle Raines and his niece Cassidy, of Newport; aunt and uncle, Eunice and Bob Sexton, of Newport; numerous cousins; many many friends; and his animal companions. Celebration visitation will be Sunday, October 6, 2013 from 4 to 6 p.m. in the McCoy Funeral Home, 150 Country Club Drive SW, Blacksburg. – See more at: http://www.legacy.com/obituaries/roanoke/obituary.aspx?n=kenneth-mccoy-cumbee&pid=167337534&fhid=10966#fbLoggedOut