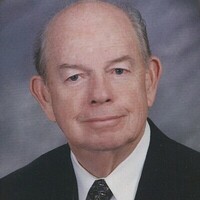 Robert “Bob” Hall Cruise passed away peacefully at home surrounded by his family on March 9, 2021.

Bob was born on March 12, 1931 in Staunton, Virginia to Guy and Stella Cruise. Bob grew up in Pulaski, Virginia and graduated from Virginia Tech in 1953 with a Bachelor of Science degree in Civil Engineering. He later earned an MBA from Fairleigh Dickinson University in New Jersey. He served honorably in the U.S. Army following graduation from Virginia Tech. He began his post-military career with the Pennsylvania Railroad. Bob enjoyed a 31 year career with Hercules, Incorporated serving in management positions in Radford, Va., Kenvil, N.J., Parlin, N.J., Wilmington, Del, and Salt Lake City, Utah. He capped his career as President of Hercules’ subsidiary Global Environmental Solutions.

Bob married Mary (“Lucille”) Allen of Radford, Virginia and together they raised their 4 children in Radford, and later in Succasunna, N.J. Following Bob’s retirement in 1992, Bob and Lucille moved back to Virginia and enjoyed traveling, spending time with their children, grandchildren and great grandchildren.

Bob participated actively in various churches everywhere they lived, but always maintained a close connection to his home church, First Baptist Church of Radford. Bob loved music and was blessed with the talent of playing by ear. He enjoyed playing piano for his church, his family, his friends, in various bands, and in local nursing homes. He was also an enthusiastic VA Tech supporter.

The Cruise family is in the care of Mullins Funeral Home & Crematory in Radford. www.mullinsfuneralhome.com