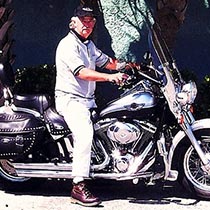 Ronald Dean “Duck” Croy, 83, of Pearisburg, VA passed away unexpectedly Saturday, March 14, 2020 at his home in Pearisburg. Duck was born March 18, 1936 in Staffordsville, VA. He was the son of the late Raymond Randolph and Virginia Moye Croy.

Duck had a passion for golf, cars and motorcycles and had never met a stranger.

A private memorial service will be conducted at a later date.

Condolences can be sent to the family online at givensfuneralhome.com.