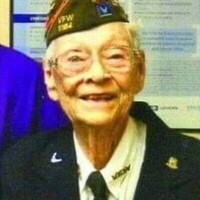 Alanna Grayce Maddock Crowder, age 91 of Dublin passed away Wednesday morning August 11, 2021 at the Waddell Nursing Home in Galax, Virginia. Born June 10, 1930 in Jackson, Michigan she was the daughter of the late Donald Lester Maddock and Anna May VanSickle Maddock. She was also preceded in death by her husband, William Carrington Crowder and her brother, Dallas Richard Maddock.

Alanna was a veteran of the United States Air Force where she was stationed in Germany and later at the Pentagon. She was also a proud member of the V.F.W. Post #1184 and the American Legion & still serving in the V. F. W. 1184 Honor Guard at the age of 90.

Graveside memorial services will be held 11:00 AM – Friday, August 27, 2021 at the Southwest Virginia Veterans Cemetery, Dublin where she will receive military honors and officiated by the Post Chaplain, Bobby Ward.