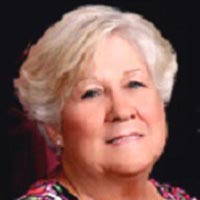 March 7, 1945-January 4, 2020 Carolyn Hart Crotty, 74, of Pearisburg, Va., went to be with the Lord on Saturday, January 4, 2020 at her home which she shared with her loving husband of close to eight years. Carolyn was born on March 7, 1945 in Norfolk, Va., and was a daughter of the late Lydia Brothers Bookman. Besides her mother, she was preceded in death by her first husband of 42 years, Richard Hart.

Carolyn retired after 35 years from the Giles County Public Schools, a very active member of the Riverview Baptist Church for over 20 years, where she took a lot of pride in decorating the church. She was a longtime volunteer with the Carilion Giles Community Hospital Auxiliary with her being president for the last three years. She was also very supportive of the Virginia Tech Football Team.

In lieu of flowers, donations can be made to the Gideons International or the Carilion Giles Community Hospital Auxiliary.