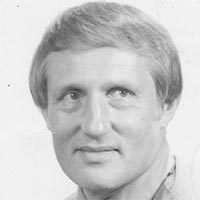 Gerald Howard Cross, age 86, of Blacksburg, passed away unexpectedly on the evening of Thursday, February 6, 2020. Born in Marshall, Minnesota on November 15, 1933 to Marvin and Bertha Cross.

He served in the United States Army from January 1956 to June 1959. During this time, he completed basic training and Officer Candidate School, receiving his commission in August of 1957. He then served active duty in Hawaii until entering the reserves in June of 1959.

Jerry taught secondary school in Fargo, ND until the family moved to Blacksburg, VA in 1972, when he accepted an extension position with the Department of Fisheries and Wildlife at the College of Forestry at Virginia Tech. He later became the Department Head for 13 years and also spent a year at the campus in Northern Virginia. He was conferred as Professor Emeritus upon retirement.

He was most happy when he was outdoors where he enjoyed birding, hiking, and biking. But, his greatest pleasure was fishing and hunting. His love for both began as a young child and lasted throughout his entire life. Whenever he had a chance he worked them into his busy schedule. He also a “runner” for many years in which time he completed two marathons.