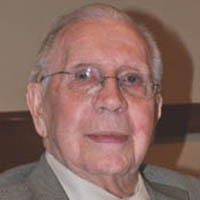 William F. (Bill) Crigler, Sr., 94, of Radford, passed away peacefully on Tuesday, August 5, 2014 at his home surrounded by his family. He was born December 20, 1919 in Brightwood, Virginia to the late Jason C. and Clara Weaver Crigler. He was preceded in death by his siblings Fannie Hardie Jefferies, Maj. Gladys Ellen Crigler and Bernard W. Crigler.

He was a lifelong Lutheran, first at Hebron Lutheran Church in Madison County, Virginia and later Christ Lutheran Church in Radford in 1949 where he served on various committees. Bill attended VPI and graduated from Roanoke College in 1943 with a degree in Business.

Bill and Ilene owned and operated Crigler’s Shoe Store in downtown Radford from 1949 until 1995. They took pride in taking care of his customers old and young alike, properly fitting his customers with quality footwear for three to four generations. He was a member of the Radford Rotary Club for 40 years serving as president in 1965-66. He was involved in many local projects and supported and promoted Downtown Radford United Merchants (DRUM).

We are grateful for Bills stay at home care provided by Carolyn, Natasha, Vickie, Ambrose, and Carol.

Bill’s family will receive friends and family at Grove United Methodist’s fellowship hall from 1:00 pm until 3:00 pm on Saturday, August 9 followed by a memorial service at 3:00 pm in the church sanctuary to celebrate Bill’s life. The Rev. Conrad Braaten and The Rev. Terrie Sternberg will officiate. The service will continue at the Christ Lutheran Church Memorial Garden, 201 Harvey St., Radford, where Bill’s ashes will be scattered.

The Crigler family is in the care of Mullins Funeral Home & Crematory in Radford. mfh@mullinsfuneralhome.com