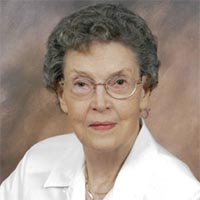 Margaret Emily Corbell Crate, age 98, of Christiansburg, passed away peacefully from this life on April 25th to continue serving others in the next.

A generous and kind individual she taught us by example all that we needed to know; how to be kind and respectful to all, to always think of others first, to help anyone in need, to forgive completely, and how to accept all hardships and move on. She did all this graciously; never harming another soul intentionally or speaking an unkind word, exhibiting true and pure love to her family and to all of those that she knew. More concerned about the well-being of others than of herself, she touched many and was universally loved; she mentored many young women through the Young Women’s Association at North Riverside Baptist Church, and many of those women maintained their relationship with her through the decades that followed.

Margaret was born on September 6, 1921 in Newport News, Virginia to Mark Corbell and Jennie Todd Corbell Beckley. She was a lady of two coasts, growing up in Newport News and going to college in Ventura, California. Upon returning to Newport News she met her husband Harold Crate who was working as an engineer at NASA; they were married on September 8, 1943 which resulted in a long and loving marriage. Their hobbies were numerous, and their interests varied; late in life they spent many years traveling extensively throughout the United States, Canada and Europe. A love of outdoor activity led to her and Harold’s active participation in the Tidewater Appalachian Trail Club camping, hiking, canoeing, climbing, and making friends. They were instrumental in the construction of the Putnam Cabin near Waynesboro still in use by trail club members today.

Due to current restrictions resulting from the Covid-19 pandemic, a memorial to celebrate Margaret’s full and amazing life will be held at a later date. In lieu of flowers, donations can be made to the Tidewater Appalachian Trail Club at P.O Box 8246, Norfolk, VA 23503, or Post-Polio Health International (information at http://www.post-polio.org/donhow.html). Arrangements by McCoy Funeral Home, Blacksburg.