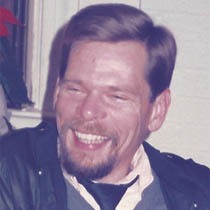 David Alan Crate, of Christiansburg passed away peacefully on Tuesday February 9th after beating the odds against him as a polio and post-polio victim for nearly 7 decades. He was severely afflicted at the age of 3 with polio during the epidemic that occurred in the early 1950’s, but he never let the disease define him.

Despite not being able to participate in sports and other activities, he enjoyed attending events and being an integrated part of the schools he attended. He was named the “Most School Spirited” Senior Personality at Ferguson High School. He obtained an Engineering Technology degree from Thomas Nelson Community College, and followed with a long career as an engineering designer for EE Paine Engineering, Alfonso & Associates, and Sledd Runey & Associates – Vanasse Hangen Brustlin in Newport News. He bought his own house in which he lived independently for many years.

David was a man of many talents and hobbies. An accomplished student of world history, he also enjoyed philosophical contemplation and deeply appreciated music; he never let his intellectual talent go to waste. Ever curious, his interests included short-wave radio, model airplanes, and a love of shooting, fishing, and collecting. He was a kind, respectful and generous individual that never held a malicious thought, and was loved and cherished by many. He will be sorely missed.

He is preceded in death by his father Harold, and survived by his mother Margaret, his brother Steve and wife Linda, and his brother Jeff and wife Ann, nieces Jennie Crate and Emily Jefcoat, and grand-nieces Maggie and Bonnie, who were just beginning to know their “Uncle Dave”.

Donations in lieu of flowers can be made to the March of Dimes (information at https://www.marchofdimes.org/giving/support-march-for-babies.aspx?src=MFB), or Post-Polio Health International (information at http://www.post-polio.org/donhow.html). Arrangements by McCoy Funeral Home, Blacksburg.