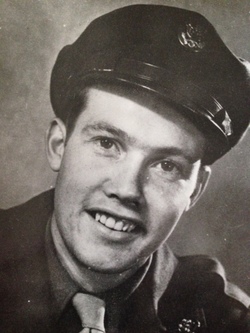 Marvin Earnest Cox, 91, of Dublin, Virginia passed away Wednesday, May 14, 2014 at the Veterans Affairs Medical Center in Salem, VA. He is survived by a daughter and son-in-law, Sandra and Delmas Lytton; granddaughters Valerie Cummings, April Combs, and Ashley Lytton; thirteen great-grandchildren, and one great-great grandchild, all of Snowville, Virginia. Also surviving are brothers and sisters-in-law Carl and Vada Cox and Joe and Glenna Cox; sisters Ruth Talbert, Muriel Hollandsworth, Kate Phillips, and Minnie Turman; brother-in-law Monroe Gallimore; sister-in-law Linda Cox; and many nieces and nephews. He was preceded in death by his parents, Earnest and Mattie Cox of Indian Valley, Virginia; sisters Avis Cox, Gertrude Harris, Ethelene Hanky, and Mabel Gallimore; and a brother Richard Cox.
Mr. Cox left high school and joined the Civil Conservation Corps upon the death of his father in 1939. Following service in Europe with the United States Army Air Corps during World War II, he earned a GED and later completed degrees in electronics and instrumentation from New River Vocational Technical School, now New River Community College. Mr. Cox continued to pursue his interest in electronics after retirement from Corning Incorporated and was widely known for repairing and restoring antique jukeboxes.
The family will receive friends and relatives from 1:00 to 2:00 PM on Sunday, May 18 at the Mullins Funeral Home in Radford, Virginia. Funeral services will follow at 2:00 PM with the Reverend Nathan Phillips officiating.
A graveside service will be conducted with full military honors on Monday, May 19 at the Southwest Virginia Veterans Cemetery, Dublin, VA.
In lieu of flowers, donations can be made to the National D-Day Memorial in Bedford, Virginia or the American Heart Association.
The Cox family is in the care of Mullins Funeral Home & Crematory in Radford.