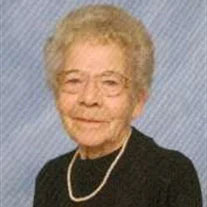 Dorothy Thompson Cothran, 84, widow of Julian Evans Cothran, was called to Heaven on Friday, November 12, 2010 at her home in Blacksburg, VA. “Dot” as she’s known to those who loved her, lived a very full life.

Following graduation from Pan American Business College in Richmond, VA, she was employed as an accountant at Bryan Brother’s. She retired after many dedicated years, only to return again to the work force years later with the Commonwealth of VA Department of Corrections. In 1989, she retired again but never stopped working. A lifetime member of the UMC. She was active in her church, she enjoyed many things from yardwork to reading.

We would like to thank her caregivers, Elizabeth Cooper, Nicole Garland, Gloria Hylton and Darlene McGuire for the wonderful care of our mother. Special thanks and much love to Dee Ann Bruce for the many sleepless nights, and for putting her own life aside in order to take care of her “Nana”.

A memorial service will be announced at a later date. In Lieu of flowers, the family requests that contributions be made in her memory to Williams Cemetery Association, 1587 Hinkle Rd., Kenbridge, VA 23944 or to the Bethany United Methodist Church, 3815 Governor Harrison Parkway, Lawrenceville, VA 23868.