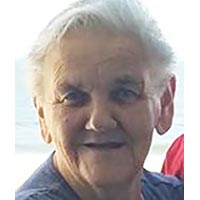 She is survived by her Daughter & Son-In in-law: Catherine & Raymond Carhart -Pulaski;

A Memorial Service will be held at a later date in Maryland. A Very Special Thanks to Highland Ridge Rehab Center in Dublin, Va. and Mullins Funeral Home in Radford, Va.