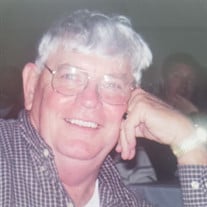 Charlie Surface Costigan, Jr., 79, of Christiansburg, passed away on August 12, 2021. He retired from the Radford Army Ammunition Plant after 38 years of service and was a faithful member of Bible Baptist Church. His favorite thing to do was spoiling his two granddaughters. He also loved gardening, especially watching his tomatoes grow. He also really enjoyed watching the trains pass behind his house – the 611 was his favorite train that he rode as a young boy.