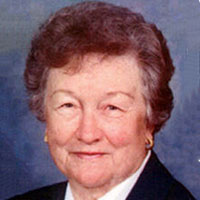 Dorothy Louise Thompson Corte died Wednesday, July 21, 2010 at her home in Christiansburg, Va. She was 87. A native of Marion, Ohio, Dorothy was born on July 11, 1923, a daughter of Fred and Una Grace Ruff Thompson.

She graduated from Harding High School in 1941. In 1944, she received her RN degree in Columbus, Ohio from Grant Hospital School of Nursing. In 1945, while working at Grant Hospital, Dorothy met and married her husband of 65 years, Mirto Corte of Kimball, W.Va. Dorothy and Mirt moved to Bluefield, W.Va. in 1948 where they lived for 44 years. She continued her nursing career in Bluefield, working at St. Lukes Hospital and later for Dr. Otis G. King. In 1988, Dorothy and Mirt retired to Skidaway Island in Savannah, Ga. and later moved to Christiansburg, Va. in 2002.

Dorothy led an active and energetic life. She loved traveling, entertaining friends and most of all she loved nature and cherished the time spent with family and friends at their Claytor Lake cabin. She was very athletic, participating in baseball, golf, fishing and boating among other sporting activities. She read extensively and was an avid bridge player. Dorothy’s rich family history and her roots growing up in the Marion, Ohio farm community served her well as she traveled the road of life. She will always be remembered as a woman of substance, a strong woman with a tender touch.

In lieu of flowers, please consider honoring Dorothy with a donation to the Christiansburg Presbyterian Church or a charity of donor’s choice.

A memorial service will be held at 11:00 a.m. on Saturday, August 21, 2010 at Christiansburg Presbyterian Church, 107 West Main Street, Christiansburg, Va., officiated by Dr. Don Makin. Interment will occur on October 16, 2010 at Marion Cemetery in Marion, Ohio.

Arrangements are being handled by Horne Funeral Service & Crematory, Christiansburg, Va. Online condolences may be sent by visiting www.hornefuneralservice.com.