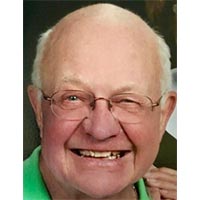 Richard Cornett (Dick) went home to be with the Lord on Friday, September 27 at his adopted home of English Meadows in Blacksburg, Virginia. He was surrounded by his Virginia family.

He was born November 7, 1934 in Gallipolis, Ohio, the son of Urban and Marie Cornett. His brother John Cornett (Ann), sister Peggy Bishop (Jack), and one brother-in-law George Miller have preceded him in death. Dick is survived by his sisters Pat Kashouty (Bill) and Rose Miller. On May 30, 1959 he married Margaret Cornett (deceased).

Dick is survived by his daughter and son-in-law, Sharon and James Newberne of Blacksburg Virginia; daughter Carla Palmer of Radford, Virginia and son and daughter-in-law Tom and Kelly Cornett of Greensboro, North Carolina. Loving “Grandpam” to Jessica (Newberne) and husband Scott Mattox of Radford, Virginia, Holly Newberne of Blacksburg, Virginia, and Drew and Macey Cornett of Greensboro, North Carolina. Dick is also survived by numerous nieces and nephews who loved their “Uncle Dick” very much.

Dick attended school at Saint Vincent Prep and College, from which he graduated in 1956. From there, he attended Seton Hall/Rutgers Dental School, graduating in 1960. Dick enjoyed a long career in dentistry; he practiced in Gallipolis for 37 years. Dr. Cornett served as the Washington Elementary School dentist from 1969-1974. He enjoyed a very active life with hunting and fishing with his father as well as a good round of golf with his brother and friends.

Dick was very active at St. Louis Catholic Church as a lector and eucharistic minister. He served as a Member to the Third Degree in the Knights of Columbus. Upon retirement, Dick took up artwork with stained glass. He enjoyed creating unique tables, lamps, and windows. One of his pieces of stained glass is hanging at the fellowship hall at St. Louis Catholic Church.

In 2015, Dick and his wife Margie moved to Blacksburg, Virginia to be closer to their children and grandchildren.

A service is planned for late October in Blacksburg, Virginia. Final burial will be observed by family in late fall at St.Vincent Cemetery in Latrobe, Pennsylvania.

The family is asking for donations to be made in Richard Cornett’s name to St. Louis Catholic Church in Gallipolis Ohio.