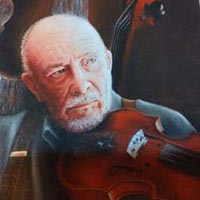 Arthur attended Check school and later enlisted into the United States Army. He served his country proudly during World War II, traveling through many countries including China and Italy. When his service in the Army ended, Arthur returned home and married Bonnie Conner, also from Copper Hill. He retired from Norfolk and Southern Railroad after many years of employment. He and Bonnie raised seven children. They were married 57 years before her death in 2005. Arthur married again to Ilene Vest Conner in April of 2007, who survives him.

He was an accomplished woodworker and was well-known for his talent and craft of making fiddles and other stringed instruments. Arthur loved bluegrass music, playing and listening, and talking with other musicians. He also enjoyed fishing and visits from his many grandchildren, great-grandchildren and other relatives and friends.

Due to the current conditions concerning the COVID-19 virus, the family asks friends to consider sending condolences through prayers and cards but welcomes visitors to attend in person if desired. Visitation entry will be limited to 10 people at a time to comply with the regulations put in place by the Governor. Online condolences may be shared with the family by visiting www.oakeys.com.