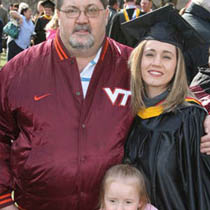 Roger Dale Conley, 57, of Narrows, passed away Wednesday, March 23rd, 2016. A lifelong resident of Giles County, he was born on January 14th, 1959, and was the son of the late David Estle and Evelyn Rosetta Blankenship Conley.

Roger was a longtime employee of Celanese in Narrows with 32 years of service. He enjoyed hunting, fishing, and riding his four-wheeler. But more importantly, Roger loved spending time with his grandchildren.

Left to cherish his memory are a daughter, April Conley Williams and husband Jamie of Pearisburg; a son, Jason Atkins of Radford; two grandchildren, Braylyn Minnick and Xander Williams; two brothers, David Conley and wife LaDonna of Peterstown, and Ronnie Conley of Narrows; and a sister Judy Conley of Narrows; numerous nieces, nephews, cousins, and many special friends, including his canine companion, Cricket.

Funeral services will be held Saturday, March 26th, 2016 at 3 PM in the Chapel of Riffe’s Funeral Service in Narrows. Burial will follow in the Boyd Cemetery in the Wolf Creek community near Narrows. The family will receive friends at Riffe’s Funeral Chapel Saturday from 12 noon until just prior to the service.