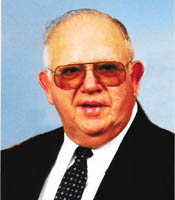 Reynard Ray Compton, 83, of Greensboro, NC and Radford, VA, succumbed to heart failure at Moses Cone Hospital surrounded by his family on Sunday, February 2, 2014. Mr. Compton was preceded in death by his father, Raymond Frazier Compton; his mother Willie Gray Anderson Compton; and his brother Raymond Compton Jr. Mr. Compton was born in Tazewell County, Yards, VA and is survived by his loving wife of 58 years, Ruth Barbour Compton; along with four children: son Brian (Christel) Compton of Pinehurst, NC, son Bart Compton of Chesapeake, VA, son Aaron (Dawn) Compton of Lynchburg, VA, daughter Brenda (John) Compton Lech of Greensboro, NC; five grandchildren; granddaughter Sarah (Tom) Compton Wright, granddaughter Lanie, grandsons Tucker, David and Luke; great-grandson Cooper; and many other loving relatives. Ray was a loving father, husband, grandfather and friend to all. Mr. Compton was a 1961 graduate of Virginia Tech. Served in the US Air Force from 1951 to1955. He was a proud member of Central United Methodist Church in Radford, VA for 40 years serving as youth sponsor, bus driver for many trips and Bus Fund Committee Chairperson. He was also a member of Clinton Lodge #73 AF & AM for over 50 years. He retired from Lynchburg Foundry with over 30 years as an Industrial Engineer. Mr. Compton was also a huge supporter of the Radford Bobcats and helped the Radford School System as a substitute bus driver for special trips. Ray believed in his country, being a proud American, helping others, and setting an example for others in the way he lived his own life. A special thank you to the White Stone Community in Greensboro for their loving care and support over the past two and a half years. Funeral services will be held Thursday, February 6, 2014 at 1:00 pm at the Central United Methodist Church in Radford with Rev. Don Shelor and Rev. Cal Maas officiating. Mr. Compton will be laid to rest at the Southwest Virginia Veterans Cemetery in Dublin, VA with full military honors. In lieu of flowers, memorial donations may be made to the Central United Methodist Church, 803 Wadsworth St., Radford, VA 24141. The Compton family is in the care of Mullins Funeral Home & Crematory in Radford. www.mullinsfuneralhome.com