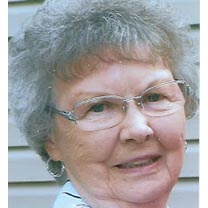 Nelcie was a faithful wife and enjoyed her life together with Melvin. They had fun gardening, yardwork, golfing, and going out on the farm. She was most proud of being a homemaker and enjoyed cooking up huge holiday meals. Her giving ways came from the heart.

As a mom, love and care was always felt. She was there to help out in any way. Time spent together will be forever cherished in the hearts of her daughter and son.

She adored her two grandsons. Being a grand-mommy was filled with fun and laughter. She enjoyed playing checkers and Old Maid with them. They always put a smile on her face.

Her family was very important. She loved visiting her brothers, sisters, and their families.

She was a member at Floyd Baptist Church and was involved with many groups throughout the years. The best time was when she was a youth director.

She always looked forward to playing golf on Thursdays with her lady friends at Great Oaks County Club. She was the first lady to record a hole in one and was a member from 1967 to 2020.

Doris Harris, who helped care for mom, became a part of our family. Special thanks to Doris, Carol Hurst, Susan and Jerry Boothe, Dr. Joel Hullett, Dr. Manuel Marrufo, Carilion Home Health, and Carilion Hospice. Also want to thank family and friends for all the cards, calls, and visits.

Because of her love for children, in lieu of flowers, donations can be made to Same Fight, in care of Medical Charities of Floyd, C/O Thompson & Griffin PC, P.O. Box 640, Floyd, VA 24091.

There will be a graveside service on Sunday, December 5, at 2 PM at the Lee Cemetery at Tuggles Gap. Arrangements made by Maberry Funeral Home, Floyd, VA.