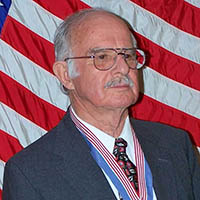 Carson L. Compton, of Pulaski, VA, husband of Ilene Cannaday Compton, passed away on Wednesday, December 16, 2020, at home at the age of 94.

Born in Floyd County Virginia, to Ashby and Carrie Compton on June 29, 1926, Carson grew up off of the Blue Ridge Parkway where his father was an accomplished carpenter who was later known for his craftsmanship of grandfather clocks.  Carson was a veteran of the U.S. Army having served during World War II in the European Theater in France, Belgium, Luxembourg, and Germany.

Carson returned to Floyd County and married Floyd native Ilene Cannaday in December 1948 and later moved to Pulaski County.  He was retired from the former Pulaski Motor Company and was a long-time member of First Presbyterian Church, Pulaski, where he served as an elder.  He will be dearly missed by his family who hold many treasured memories as well as possess hand crafted furniture and keepsakes he and Ilene lovingly made each Christmas in earlier years.

He was preceded in death by his dear daughter Janie Compton Comings, sisters Aileen Lewis and Odell Compton, and brother Clyde Compton.

The family extends heartfelt appreciation to Medi Home Health & Hospice and Patti Anderson for their care and support, and to kind neighbors and friends during this time.

Visitation is planned for Saturday, Dec 19, Stevens Funeral Home, Pulaski, VA, 2 to 4; and a graveside service will be held Sunday, Dec 20, Lee Cemetery, Tuggles Gap, Floyd VA, 2:00.  In lieu of flowers, memorials may be made to First Presbyterian Church, Pulaski, VA or to Boy Scout Troop 249, in care of First Presbyterian.

Military graveside rites will be provided by the U.S. Army.