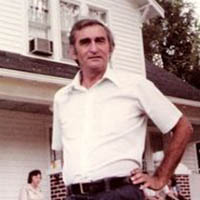 Paul Sheridan Collins born and raised in Appalachia Virginia left his earthly body behind in exchange for his glorified body on April 28, 2021. He was an incredible storyteller whose stories about his life in the coal fields of extreme western Virginia and eastern Kentucky as a young boy captivated a rather large Facebook audience.

He was the youngest of 7 true siblings (Earnest, John, Bertie, Ruby, Jeanette, Aileen). He was orphaned by the age of 14 and lived for a while with his sister Bertie, then his half-sister Emmy Carden and later on his brother Earnest in the Parrot area of Pulaski county where he learned of all the good fishing holes (he took us fishing frequently as little kids).

He and his two brothers served during WW2, when he came back from his service in Japan, he went to work at the old Clover Creamery in Radford making ice cream. He married Geneva Dulaney and had 5 children of his own. Paul moved from a house in Radford that was getting way too small to a farmhouse and 27 acres in Floyd with his family in 1962. He would spend the rest of his life in that farmhouse raising his family with his devoted wife of 64 years.

He worked for many years in the billboard industry first as a sign builder to eventual billboard salesman for 3M company, and Stafford Advertising after his departure from 3M company. His travels and time in clerk’s offices all around Virginia, North Carolina, and West Virginia led to a fascination with tracing ancestries long before the internet. He was known later in life for his work in genealogy and he was able to trace down many family histories for folks. People all over the country would call him for his information. He found several long-lost relatives for a number of people. He loved using his Ancestry web site and telling his stories on Facebook. Danny asked him recently what he thought the greatest thing he ever saw over his long lifetime, it yielded a surprising answer, Facebook.

His wit and intelligence was impressive, his vocabulary was huge. He loved making simple homemade toys as his family couldn’t afford toys when he was growing up, he was an avid FCHS Buffalo fan. When we were children, he sang crazy songs to us growing up that he learned as a young boy in Appalachia. He loved collecting arrowheads in his midlife and over time garnered an impressive collection. He loved watching sports as his physical abilities declined and was good at picking the March Madness winners, he was a long time and active member of Riner Grace Brethren Church and loved his church family.

He was preceded in death by his wife and all his siblings, he was the last living member of a very large family. What a reunion he will have!

He knew he was loved, we will miss having breakfast with him around that old kitchen table that we sat around for 60 years. The great storyteller has changed his address. We have peace knowing we will see him again.

In lieu of flowers, donations can be made in his name to the Floyd County Rescue squad. If you choose to come to the services, please wear a face mask inside of the facilities due to COVID-19.