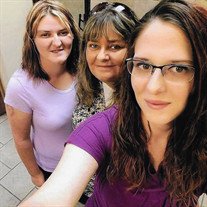 She is survived by her two daughters, Tiffany Wells and husband, Nathan, Angelina Alley and husband, David. She was always with her girls who meant the world to her. Also surviving, her mother, Frances Collins, step-daughter who she raised, Melissa McCoy, four grandchildren who was the light of her heart, Amber Wells, Hunter Wells, Bella Alley, Rhiana McCoy, two sisters, Crystal Ratcliffe, Kim Ratcliffe, three brothers, Wayne Collins, Buddy Collins, and Thomas Collins. She will be missed greatly.

Service will be held privately at a later time. Arrangements by McCoy Funeral Home, Blacksburg.