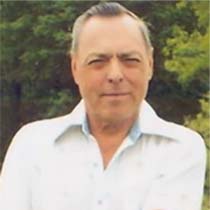 Bill graduated from Auburn High School in 1954, and served in the U.S. Navy from 1957-1961. He worked at Corning Glass for 20 years, and retired from Findlay Industries, Dublin, in 2002. He also clerked for McNeil Auctions for over 50 years.

Bill has lived in Pilot and farmed his entire life. His endeavors to help others was his goal, and was a very talented person at anything he set forth to do and has passed many traits on to his family.

The family would like to thank Dr. Daniel Bauer, Dr. R. Lee Meyers, DeEtta Ray, D.N.P., and Dr. Harry McCoy, and their staff for the great health care received by Bill over the years.

The family will receive friends from 5-8 p.m. on Thursday, September 1, 2016, at Horne Funeral Home. The Graveside Service will be held on Friday, September 2, 2016, at 2 p.m. with full military honors at Roselawn Memorial Gardens, with Rev. Richard Kingrea officiating.