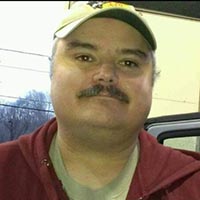 Eric T. Clyburn, 54 of Glen Lyn, VA unexpectedly left this earth on December 24, 2020 at his home. Eric was born on January 7, 1966 in Pearisburg, VA and was a son of the late Bobby Virgil Clyburn and Patsy Sue Dent Clyburn.

Eric was a 1984 graduate of Narrows High School Greenwave and was a U.S. Army Veteran. He was a long haul trucker for over 20 years and finally was working for W.V. Recycle where he made numerous life long friends that he cared about deeply.

There will be no services per his request. The family is being served by Givens – Riffe Funeral Service in Narrows, (540) 726-2442, and online at riffefuneralservice.com.