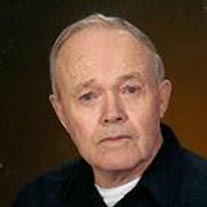 He was born in Giles County, Virginia, on May 8, 1929, and was the son of the late James Glen Cline and Mary Susan Frazier Cline. In addition to his parents, he was preceded in death by his first wife, Ruth G. Williams Cline and brother, William Glen Cline. Frank was a U.S. Army Veteran who served in the Korean War, was a machinist for Celanese for over 35 years, and was a lifetime member of the Peterstown Missionary Baptist Church where he served as deacon and taught Sunday School class for many years.

Graveside services and burial will be Wednesday, February 1, 2017, at 2:00 PM at Peterstown Cemetery in Giles County, VA with Bryan Pruett officiating. Visitation will be from 1:00 PM to 2:00 PM at Broyles-Shrewsbury Funeral Home, Peterstown, WV. Online guest book can be signed or condolences may be sent to the family at www.broyles-shrewsbury.com. Arrangements by Broyles-Shrewsbury Funeral Home, Peterstown, WV.