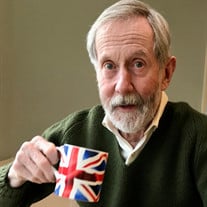 Even though he insisted he would live to be one hundred, Peter J. Clarke, 83, died August 15, 2021. During the final years of his life he joked and teased, as he always did, even while traversing the “long goodbye” associated with Alzheimer’s disease. Until almost the end, he continued to charm anyone susceptible to his wit and pranks.

Peter was born to John A. Clarke and Mable D. Walsh Clarke in London, England February 26, 1938. He was one of thousands of children evacuated from London with his mother at the start of World War II.

For more than 40 years, Peter was an Electrical Engineer with “Generous Electric,” as he liked to call GE. He was known for his dogged determination at solving problems and, always, for his love of a “good pint” and a few laughs with his mates after work.

He is survived by his wife Judith who convinced him to marry her 40 years ago after a seven-year courtship. With the marriage Peter gained two daughters, Carolynn and Leslie. He won their hearts when they were very young with fig newtons, Kentucky Fried Chicken and Pepsi. Carolynn and husband Bill Lyman and Leslie and husband Martin Daniel and their children Samantha and Jeremiah survive.

The family sends thanks to the staff at Warm Hearth Kroontje Center, notably nurses Tasha, JoBeth, Janey, Robin, Cassidy and others and to longtime companions Mark and Bill.

There will be no formal service, but a gathering for friends and former colleagues will be arranged for a later date. There will be beer.

In lieu of flowers, please consider donations to the Alzheimer’s Association.