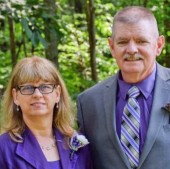 Bobby was born June 18, 1956 the son of Robert Sr and Nancy Clark of Warrenton VA. Pam was born April 2, 1959 the daughter of Lewis and Christine Judd of Amissville VA.

God brought Bobby and Pam together and they were married on June 19, 1976. Bobby and Pam were equally passionate about Christ. Both dedicated their lives to spreading the word of God and helping those in need.

Bobby and Pam’s life will be celebrated at Abundant Life Fellowship, 4491 Old Pike Rd in Pilot Va., at 11am on Friday August 28, 2015 with pastor Larry Meadors officiating. Interment will follow in Jacksonville Cemetery, Floyd VA. The family will be receiving friends 6 until 8 pm on Thursday August 27, 2015 at Gardner Funeral Home, 202 E. Oxford St. Floyd VA.

In lieu of flowers, charitable donations can be made to the Alzheimer’s Association at alz.org or to World Missions at iphc.org. Online condolences may be made at www.gardnerfuneralhomefloyd.com. The family is being served by Gardner Funeral Home, Floyd (540) 745-2007