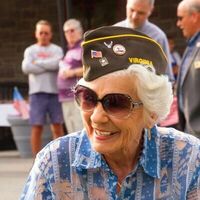 Olivia DeSaBaugh Clark, age 95 of Pulaski passed away Thursday, August 11, 2022 at the Highland Ridge Rehab Center, Dublin. Born August 12, 1926 in Florida, she was the daughter of the late Forest DeSaBaugh and Niona Kea Pope. She was also preceded in death by Sons, Donald Eugene Clark, Jr. and Richard Wayne Clark; Brothers – Richard, Charles, and Walter Jennings and one Sister, Ruth Edwards.

She was a veteran of the United States Army having served under General Patton in Germany during World War II. Olivia was the first female Deputy for the Pulaski County Sheriff ‘s Department and she retired as a security officer with the Radford Arsenal. She attended the Pulaski Church of God.

Funeral services will be held Monday, 11:00 AM, August 15, 2022 in the Bower Funeral Home Chapel, Pulaski with Pastor Tony Eads officiating. Burial with honors will be at the Southwest Virginia Veterans Cemetery, Dublin.

The family will receive friends Monday from 10:00 AM until service begins at 11:00 AM. To sign the online guestbook, visit www.bowerfuneralhome.com – Bower Funeral Home, Pulaski is handling the arrangements for the family.