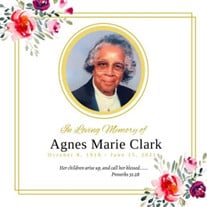 She worked and retired from Facilities Management at Radford University in 1984. A member of New Mount Olive United Methodist, Agnes was active in the choir and the “Mother” of the church. She had a keen sense of humor and enjoyed spending time with family and friends.

The family will receive friends on Tuesday, June 22,2021 from 11am until 12pm with the Homegoing Service immediately afterwards from 12pm – 1pm. All services will be held at the New Mount Olive United Methodist Church located at 309 Russell Ave. Radford, VA 24141. Internment will be held at Sunrise Burial Park in Fairlawn Va.