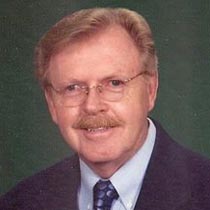 Edwin Curtis Chrisman Jr., 73, of Christiansburg, departed his earthly home to go to his heavenly resting place Tuesday, March 22, 2016, after battling Merkel Cell Skin Cancer for nearly two years. Curtis was born January 8, 1943, in Christiansburg, where he lived all of his life. He was a proud graduate of the CHS Class of 1961.

Curtis was preceded in death by his parents, Edwin and Gaye Chrisman; wife’s parents, Arthur and Lois McCurry; and many special aunts and uncles; and his beloved Dachshund, Heidi. He is survived by his devoted and loving wife of 49 years, Faye McCurry Chrisman; brother-in-law, Kermit McCurry and wife, Diane of Dublin; nephew, Tony McCurry of Pulaski; niece, Sharon M. Hughes and husband, Todd of Blacksburg; great-nephew, Brandon Litton of Blacksburg; as well as many other special relatives and friends. He will be greatly missed by all.

Curtis was a proud lifelong member of St. Paul United Methodist Church. He served on many committees and church related activities such as Frank Wickham SS Class, St. Paul’s Men’s Group and the church’s Brass Ensemble, where he played the tuba, and the Joy Singers. He was also an active member of the McDaniel Masonic Lodge No. 86 A.F. & A.M. and the Christiansburg American Legion Post No. 59 until his cancer occurred. He enjoyed all of God’s beautiful creations and caring for many varieties of birds as well as many four-legged friends. Curtis also enjoyed antique vehicles plus car shows, most sporting events, and his CHS Class Reunions.

The family will receive friends 5 to 7 p.m. Thursday, March 24, 2016, at Horne Funeral Home. The Funeral Service will be held 11 a.m. Friday, March 25, 2016, at St. Paul United Methodist Church with the Rev. Paul Song and the Rev. Doug Kanney officiating. Interment will follow in Sunset Cemetery.

Online condolences may be left at www.hornefuneralservice.com.