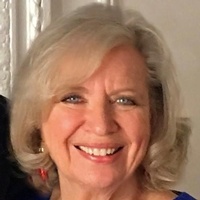 Gayle Christian, formerly of Radford, Va., died on Saturday, May 26, 2018, at the University of Utah Hospital from the after effects of a stroke that she suffered while vacationing in Yellowstone National Park with her husband, David Beek.

Gayle is remembered for her vivacious personality: lively, curious, generous and fun loving with a special way of touching people wherever she went. Her enthusiastic love of life, her enjoyment of family and friends and her fondness for books and travel were inspiring. Her laughter will be greatly missed.

Gayle is survived by her husband, David Beek, son, Davy Beek and daughter, Kimberly Beek, all of New York City; and her siblings, Diane Christian of Radford, Va., Patrick Christian and Joan Mueller of Pownal, Maine, Vicki Rhodes and John Rhodes of North Myrtle Beach, S.C., and Penny Christian of Annandale, Va.; as well as many nephews and nieces. Gayle was predeceased by her brother, Tommy Christian, and her parents Ruth and ‘Chris’ Christian (of Chris’ Restaurant) of Radford, Va. Gayle is also mourned by David’s 10 siblings and the many other relatives on both sides of their family.

Gayle graduated from Radford High School in 1960 and from Emory and Henry College in 1964. She then taught high school for two years in Richmond, Va. In 1966 Gayle moved to New York City where she lived until her death. She and David were married in August, 1977, in Radford. In 1980 Gayle received her MBA from Fordham University and spent the next 30 years as a principal in the family real estate business in Brooklyn, N.Y. In her early years in NYC, Gayle worked in various professional positions with the NYC Social Services Dept. and Nippon Telephone and Telegraph. Later she taught part-time at the Fordham Business School and worked as a Clinical Trial Administrator for Cervical Cancer and HIV Research at the Columbia-Presbyterian Hospital.

Since young adulthood, Gayle was an inveterate traveler, visiting over 75 countries, including Iran and Russia in the past year alone. She was naturally inquisitive and had a keen sense of adventure. An avid reader, Gayle was also a lover of the arts and music, active in the local PTA’s, libraries, and art and music organizations.