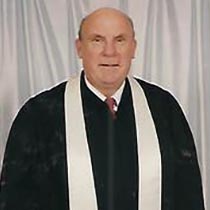 Rev. Earnest Howard Chinault, 86, of Draper, passed away Tuesday, March 24, 2020. He was born in Draper, on January 29, 1934 to the late Howard Chinault and Margaret Dolly Rupe Chinault.

The family will have a private graveside service in Thornspring Cemetery. A public memorial service will be held at a later announced time.